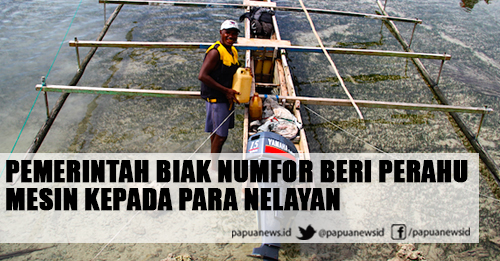 120 machine boats are ready to help fishermen in Biak Numfor District. It was delivered by Biak’s Head of Fisheries and Maritime Department, Effendi Igirissa in Biak, Tuesday, 7th March 2017.

It is said that the 120 jhonson machine boats aid will be distributed to 75 groups of fishermen and 50 groups of society surveillance. “The provision of infrastructure in a form of jhonson machine is done to support Biak Numfor’s National Program to be an integrated regional center of fisheries 2017,” Effendi said, on Tuesday. He said, Biak is chosen to be the integrated regional center of fisheries because this island is very potential to have the wealth of marine with many kinds of fish.

By the determination of this integrated fisheries center program by the Ministry of Maritime Affairs and Fisheries, Effendi said, it is expected to have a direct impact for the improvement of economic welfare and income of fishermen families.

“The board of Biak Numfor District Government will encourage local fishermen to support this integrated fisheries center policy which aims to increase fishermen’s income,” he said.

Besides giving boats aid, according to Effendi, the Ministry of Maritime Affairs and Fisheries will also build an ice factory to provide fishermen’s need. He said, the capacity of the ice factory that will be built in Biak is based on the survey result which is 10 tons load per day.

“The establishment of the ice factory will be soon realized to provide local fishermen’s need of ice with a low price,” he said.