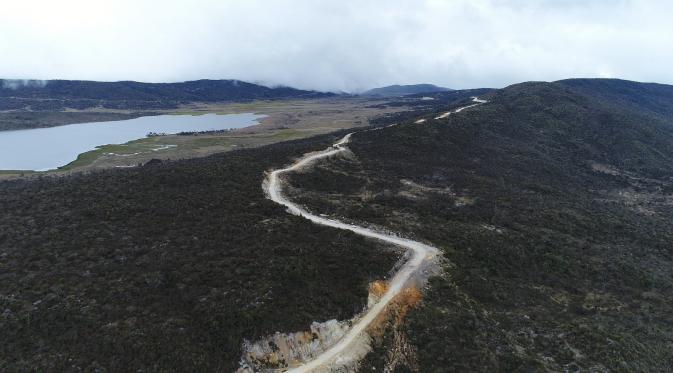 Second Corporal Eko Prasetyo (31 years old) serves in the Indonesian Army Infantry Battalion 754/Eme Neme Kangasi (ENK) in Papua and was assigned to Kenyam District, Jayawijaya Regency, Papua.  It takes him about three hour drive to travel 50 kilometres from his residence on Jalan Trans Nabire Mile 32, Kuala Kencana District, Timika to Kenyam District.  Eko explained that he is in charged for security issues for two weeks in Kenyam District.  Eko, who has been working for 12 years in Timika, has been repeatedly assigned the special task of safeguarding the security from separatist disturbances, including maintaining PT Freeport’s assets.

For two weeks in Kenyam District, Eko circumnavigated the area and took a walk along the recently completed Trans Papua Road.  The existence of the Trans Papua Road has help to open up this region from isolation.  Before, local residents would prefer to take air or water transportation to neighbouring districts rather than take the land route since the natural conditions are difficult to pass.  The government is building a four lane road (two lanes going the opposite direction) to help developed better access for local communities.  The road project was started by the Indonesian Army Corps of Engineers which cleared the trees for the road and continued by the Ministry of Public Works and Housing which paved the roads.  Not all sections of the Trans Papua Road have been paved though.

According to Eko, even when the Trans Papua Road is not completed you can already see increase economic activities as the result of the road project.  The road has shortened the distance between parts of Papua.  He continued, the existence of Trans Papua Road is like a toll road in Java. As a result, vehicles can accelerate as they like while enjoying the bonus of incredible natural scenery.

“The last section has not been paved, I do not know whether it has been paved yet since  this section should connect with the section passed by President Jokowi with (former) Commander in Chief while riding motorcycles trying the road,” said Eko.

On May 5, 2017, President Jokowi was accompanied by Army Officers and members of the Cabinet on a trail bike reviewing the 7 km Wamena-Habeman road project. Jokowi admitted that the difficult terrain in Papua has become an obstacle as well as a challenge for the development of infrastructure projects.

The Trans Papua road extends from Sorong, West Papua to Merauke, Papua along 4,330 km or almost six times the length of Jakarta-Surabaya. The National Strategic Project is targeted to be completed by 2019. The project that has been carried out since President Susilo Bambang Yudhoyono (SBY) era, has been intensified since President Jokowi was elected as the President of the Republic of Indonesia in 2014.

Until now, the Ministry of Public Works and Housing together with the Army Corps of Engineers continue to work on completing the construction of the last section of the Trans-Papua Road that has not been connected for about 479.04 km (11 percent). In fact, the initial target that has not been connected until the end of this year amounted to 366.2 km or eight percent.  Minister of Public Works and Housing Basuki Hadimuljono said, the construction of Trans Papua Road is very difficult and challenging, such as through the mountains, forests, ravines, and rivers, which makes the work not easy at all.

Constraints are often faced in the field, the weather conditions and tough environment so that officials often have difficulty bringing materials and heavy equipment to the location.  “Trans Papua’s development does not merely link the Papua Province with West Papua but opens up isolated regions or areas and thereby lowering the cost of goods,” Basuki said.

According to Basuki, the presence of Trans Papua Road also opens up the potential of the local economy, especially the tourism potential. He pointed out, the area that was once very difficult to reach such as from Ayawasi in Maybrat regency towards Petik Bintang, the road path is now open.