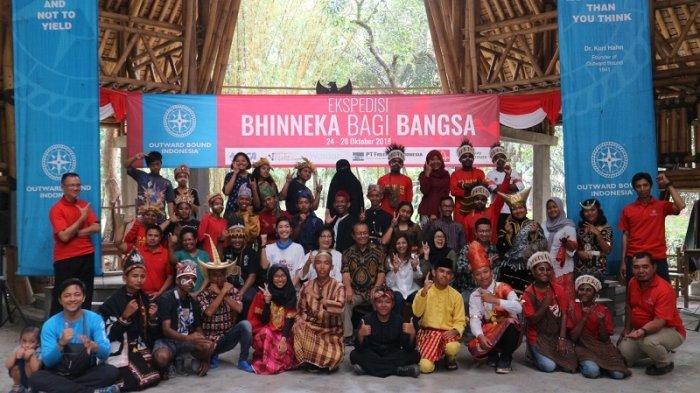 A total of 14 youths from Papua took part in the 2018 Bhinneka Bagi Bangsa (Diversity for the Nation) Expedition in Jatiluhur, West Java.

This expedition was held to commemorate the Sumpah Pemuda (Youth Oath) Day which fell on 28 October,

These young people are students from the Jayawijaya Educational Foundation, Mimika which was founded by PT Freeport Indonesia.

The 14 Papuan participants joined others from various parts of Indonesia in a five-day nature expedition and education activity from 24-28 October at OBI Eco Campus, Jatiluhur, Purwakarta, West Java.

In this activity, the participants took part in a natural expedition which included mountain climbing, flag raising, reading of the Youth Oath pledge, and mutual cooperation to build rafts.

At the end of the activity, they participated in a mini talk show at the Jatiluhur OBI Eco Campus, West Java.

“There are 14 children from Papua, they consist of junior high school students in grade 7, 8 and grade 9. In this activity, they become accustomed to being able to get along with friends from diverse backgrounds. They are used to being in a pluralistic environment. They live and attend school in the PT Freeport Indonesia corporate work area in Papua, where people value​​ mutual respect,” said Head of Public Relations of the Jayawijaya Education Foundation, Omih Gobay in his press statement.

Wendy Kusumawidagdo as the initiator of the “Diversity for the Nation Expedition” said that this activity was expected to strengthen the bonds of the participants.

“We gather youth from Aceh to Papua, a total of 13 provinces, and consist of different ethnic groups, religions, ages and races. The children carry out various kinds of natural activities such as hiking and various other activities that train cooperation, tolerance and mutual understanding,” Wendy explained.

One of the participants from the Jayawijaya Educational Foundation Junior High School, Pamella, stated that this program enabled her to get to know the outside world more and have a broader perspective.

“I became more familiar with others, so I did not discriminate friends based on culture, ethnicity or skin color. I appreciate the difference more. I think diversity is very important to fight for. Because without diversity we cannot unite. Indonesia consists of various tribes and races, people that possess various kinds of diversities. Diversity as a strength to face challenges in the future. The diversity makes us one,” Pamella said.