On the sidelines of the Indonesian President work visit to New Zealand, Jokowi took his time for a leisurely walk at Wellington Waterfront Pier. He wasn’t alone, he was accompanied by the Coordinating Minister of Political, Legal, and Security Affairs, Wiranto, State Secretary Pratikno, Foreign Minister Retno Marsudi, and Indonesian Ambassador to New Zealand Tantowi Yahya. Not only that, Indonesian students in New Zealand, which dozens of them are Papuan, participate in the morning entourage with Jokowi.

In the middle of the walk, the students had time for a dialog with the President. Marvey Ayomi, “Coordinator of Children of Papua in New Zealand”, appreciated the efforts of the Jokowi government in boosting infrastructure development in Papua.

Although is not easy, he believes Jokowi government has seriousness in building Papua. “It is not easy, I myself as a Papuan knows that to take care of Papua and the people of Papua is not easy, therefore we appreciate it,” he said on Monday (19/3). 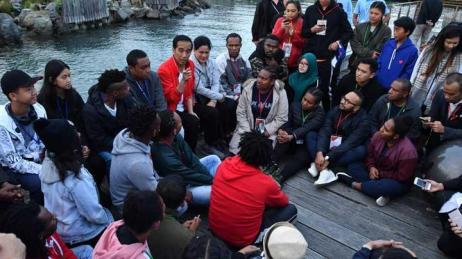 Marvey asked Jokowi to continue the development in Papua. There is one demand for infrastructure that he has requested to be encouraged in Papua; an international airport, thus “if we want to return to Papua we don’t need to transit in Bali or Jakarta, but directly to Papua,” he said.

During his meeting with the Indonesians students in Wellington, New Zealand, it was mentioned that two Papuan young women are studying in a Pilot Academy in New Zealand. The two young woman will become the two first female pilots from Papua and will work for Garuda Indonesia airlines.

This information was revealed by the Ambassador of the Republic of Indonesia to New Zealand, Tantowi Yahya. “Mr President, I would like to inform you that two graduated girls from the pilot academy, are in the final process to become Garuda’s pilots” said Tantowi. “So we will have the first two female pilots from Papua and and for Garuda Indonesia,” added Tantowi who was then applauded by the President Jokowi and the First Lady Iriana.