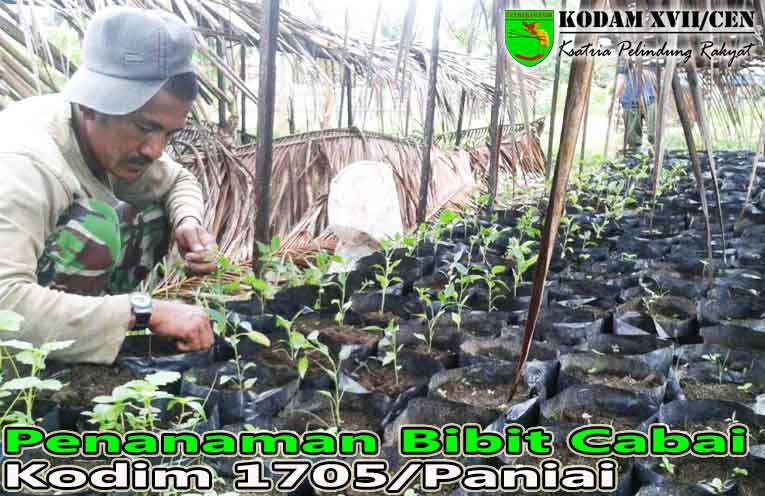 The skyrocketed price of chili has become the sizzling topic lately. The commodity’s price surged steadily way over the price ceiling recommended by the government. The weather, unbalanced supply and demand as well as transportation issues are believed to be the causes of the nationwide phenomena. The price of chili has always been an essential matter; it’s a staple ingredient of many Indonesian dishes. What would Papua’s famous Papeda Kuah Kuning be without chili?

The Government has initiated the “Chili’s Planting Movement” as a solution, a movement that will provide a major boost to the annual domestic production of chili. People are expected to grow chili in their backyard to fulfill their demand and reduce their dependency on the ever-fluctuating market.

The same movement has been implemented in the eastern part of Indonesia with the Military District Command (KODIM) 1705/Paniai and KODIM 1709/Yawa in Papua Province starting the movement by growing chili in a polybag medium in their military base’s backyard. Besides aiming to make the yard greener, this movement was meant to set an example for the community to alleviate their daily economic needs with growing short-term vegetables in the garden by utilizing the existing land, as well as to anticipate the tendency of other commodity prices in recent years to rise.

The “Chili Planting Movement” is merely a tiny part of the large urban farming / urban agriculture concept. This concept, indeed, is still brand new for most Indonesians. According to Food and Agriculture Organization (FAO), urban farming / urban agriculture is defined as being food production that occurs within the confines of cities. Such production takes place in backyards, on rooftops, in community vegetable and fruit gardens and on unused or public spaces. It includes commercial operations that produce food in greenhouses and on open spaces, but is more often small-scale and scattered around the city.

The types of plants that can be grown in this concept of urban farming / urban agriculture are highly varied such as grains, root vegetables, green vegetables, mushrooms, fruits, herbs and other ornamental plants.

That’s why the initiative from Kodim 1705 / Paniai and Kodim 1709 / Yawa in Papua Province is a positive thing that should be supported and developed. Not only in the area around the military base, but also in every yard in the community.

The KODIM and local governments can work together with NGOs and Communities to be able to urge the people of Papua to apply the concept of urban farming / urban agriculture to their own backyards respectively.