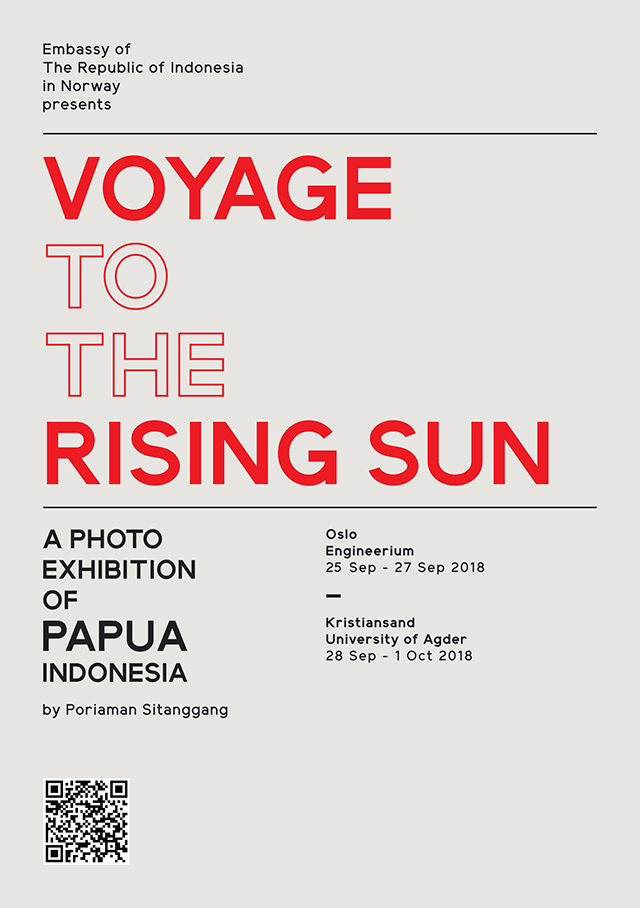 Indonesia, to be precise Papua, contains immense beauty of its nature, the local’s traditions that have been passed through generations and the local wisdoms that now play significant roles on our life through global interaction that are barely known among us.

Poriaman Sitanggang, a photographer that have been photographing Indonesia for almost 32 years and went to many remote areas of Indonesia and visiting its corners just held an exhibition in Oslo, Norway, on 25-27 September 2018. He exhibited photos taken from 1994 to 2018.

The exhibition is entitled “Voyage to the Rising Sun: Papua, Indonesia” and made possible by The Embassy Of The Republic Of Indonesia Oslo, Norway and PT Austindo Nusantara Jaya Tbk (ANJ).

There are 35 photos containing the nature of Papua, the culture and life of indigenous peoples in Papua, especially the Dani and Asmat, which were taken by Poriaman during 1994-2018.

“It’s all over Papua from Merauke at the very east of Papua, then Asmat at the south, going up to Wamena, then down to Sorong at the western Papua. I am inspired by the people I met who accepted me warmly. They shared their rich tribal culture and indigenous wisdom.  I felt very welcomed. It was my privilege and honour to take their pictures.” He said

To put it in the geographical context, Papua is one of the biggest province in Indonesia situated in the western part on New Guinea Islands. It is 74,000 km2 bigger than Norway (Papua Indonesia 459,411 km2 vs Norway 385,203 km2). Papua is rich of gas, oil, and gold resources in Indonesia. It also has one of the largest rain forest.

Through the pictures of the “Voyage to the Rising Sun: Papua, Indonesia,”  Poriaman Sitanggang brought back our picturesque memories of living close to the nature and living by the local wisdoms.

The Papuans, as captured on Poriaman’s camera,  carves our awareness about how shall we protect our forest and our diversity for our future generations.